Magician Michael Grandinetti mystifies and astonishes audiences with his sleight of hand and mastery of illusion. But when he initial steps onto the stage, it’s his smile that grabs the attention. “The first thing… that an audience notices is your smile; it’s what really connects you as a person to them,” Michael told an interviewer.

He attributes his audience-pleasing smile to several years of orthodontic treatment as a teenager to straighten his misaligned teeth, plus a lifetime of good oral care. “I’m so thankful that I did it,” he said about wearing orthodontic braces. “It was so beneficial. And… looking at the path I’ve chosen, it was life-changing.”

Orthodontics — the dental sub-specialty focused on treating malocclusions (literally “bad bites”) — can indeed make life-changing improvements. Properly positioned teeth are integral to the aesthetics of any smile, and a smile that’s pleasing to look at boosts confidence and self-esteem and makes a terrific first impression. Studies have even linked to having an attractive smile with greater professional success.

There can also be functional benefits such as improved biting/chewing and speech, and reduced strain on the jaw muscles and joints. Additionally, well-aligned teeth are easier to clean and less likely to trap food particles that can lead to decay.

The Science Behind the Magic

There are more options than ever for correcting bites, but all capitalize on the fact that teeth are suspended in individual jawbone sockets by elastic periodontal ligaments that enable them to move. Orthodontic appliances (commonly called braces or clear aligners) place light, controlled forces on teeth in a calculated fashion to move them into their new desired alignment.

The “gold standard” in orthodontic treatment remains the orthodontic band for posterior (back) teeth and the bonded bracket for front teeth. Thin, flexible wires threaded through the brackets create the light forces needed for repositioning. Traditionally the brackets have been made of metal, but for those concerned about the aesthetics, they can also be made out of a clear material. Lingual braces, which are bonded to the back of teeth instead of the front, are other less visible options. The most discrete appliance is the removable clear aligner, which consists of a progression of custom-made clear trays that reposition teeth incrementally.

How’s that for a disappearing act?!

If you would like more information about orthodontic treatment please contact us or schedule an appointment for a consultation. You can also learn more about the subject by reading the Dear Doctor magazine article “The Magic of Orthodontics.” 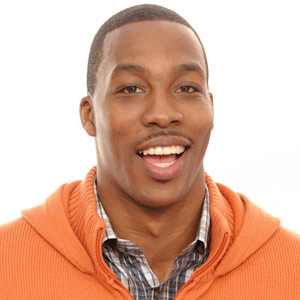 Have you started orthodontic treatment recently? Are you having a little trouble getting used to your braces? If so, you are not alone: Everybody goes through an adjustment period during which they momentarily wonder if they’ll really ever get used to this. Don’t worry — you will! And we’ve never heard anyone say, on the day their braces come off and their new smile is revealed, that they aren’t glad they went the distance. Just ask Houston Rockets all-star centre Dwight Howard, who discussed his own orthodontic treatment in a recent interview.

“I’m sure I was no different than anyone else who has ever had braces,” he told Mediaplanet. “At first I hated them so much… That changed immediately I got used to them and I actually grew to love them.” What’s Howard’s advice? “Do exactly what your orthodontist says and know that the outcome is well worth it in the end.” We couldn’t agree more! Here are some tips for wearing braces with comfort:

Our goal is to make your orthodontic treatment as comfortable as possible on the way to achieving your all-star smile. If you have questions about adjusting to braces, contact us or schedule an appointment for a consultation. You can learn more by reading the Dear Doctor magazine article “Caring for Teeth During Orthodontic Treatment.”

Fans of the primetime TV show The Middle were delighted to see that high school senior Sue, played by Eden Sher, finally got her braces off at the start of Season 6. But since this popular sitcom wouldn’t be complete without some slapstick comedy, this happy event is not without its trials and tribulations: The episode ends with Sue’s whole family diving into a dumpster in search of the teen’s lost retainer. Sue finds it in the garbage and immediately pops it in her mouth. But wait — it doesn’t fit, it’s not even hers!

If you think this scenario is far-fetched, guess again. OK, maybe the part about Sue not washing the retainer upon reclaiming it was just a gag (literally and figuratively), but lost retainers are all too common. Unfortunately, they’re also expensive to replace — so they need to be handled with care. What’s the best way to do that? Retainers should be brushed daily with a soft toothbrush and liquid soap (dish soap works well), and then placed immediately back in your mouth or into the case that came with the retainer. When you are eating a meal at a restaurant, do not wrap your retainer in a napkin and leave it on the table — this is a great way to lose it! Instead, take the case with you, and keep the retainer in it while you’re eating. When you get home, brush your teeth and then put the retainer back in your mouth.

If you do lose your retainer though, let us know right away. Retention is the last step of your orthodontic treatment, and it’s extremely important. You’ve worked hard to get a beautiful smile, and no one wants to see that effort wasted. Yet if you neglect to wear your retainer as instructed, your teeth are likely to shift out of position. Why does this happen?

As you’ve seen firsthand, the teeth aren’t rigidly fixed in the jaw — they can be moved in response to light and continuous force. That’s what orthodontic appliances do: apply the right amount of force in a carefully controlled manner. But there are other forces at work on your teeth that can move them in less predictable ways. For example, normal biting and chewing can, over time, cause your teeth to shift position. To get teeth to stay where they’ve been moved orthodontically, new bone needs to form around them and anchor them where they are. That will happen over time, but only if they are held in place with a retainer. That’s why it is so important to wear yours as directed — and notify us immediately if it gets lost.

And if ever you do have to dig your retainer out of a dumpster… be sure to wash it before putting it in your mouth! 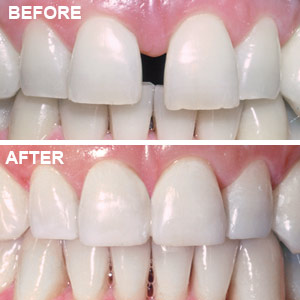 Orthodontists are able to achieve attractive results with traditional braces moving several teeth into a better position. In a way, braces are the original “smile makeover.”

But orthodontic treatment can also be useful if only a few teeth (like the two upper front teeth) need to be moved slightly. A treatment known as minor tooth movement takes only a few months as opposed to years of traditional multiple tooth movement, and with removable appliances that may use small springs or elastics to place gentle pressure on teeth to move them.

So, what constitutes a minor tooth movement scenario? As with any dental condition, the first step is a complete dental examination, particularly the bite. We also need to determine if enough room exists to close any space without compromising the bite with the opposing teeth, and if the teeth and their roots are in a good position to allow minor movement — otherwise, more extensive treatment may be called for. The surrounding gum tissues and bone also need to be healthy and disease-free, especially in adults.

We may also need to look more closely at the actual cause for a front tooth gap. If the gap is the result of the tongue habitually pressing against the back of the teeth and pushing them forward, it may then be difficult or impossible to close the gap with minor tooth movement techniques. The cause may also originate from the frenum (a thin, muscular tissue that rises up from between the upper front teeth toward the lip) if it has extended too far between the teeth. In this case we may first need to surgically remove some of the frenum tissue before attempting orthodontics or the teeth may gradually move back apart after closing the gap.

If you would like more information on orthodontic treatments, please contact us or schedule an appointment for a consultation. You can also learn more about this topic by reading the Dear Doctor magazine article “Minor Tooth Movement.”